The Texas Rugby Union began in 1967 in with clubs in Galveston, Baylor and Austin, TX. Below is a summary of the founding clubs and a few of our defining moments in our history.

We’ve broken each decade into a tab, please select the corresponding tab to view that history. As we gather more information and detail we will continue to update this timeline.

If you have any documents, photos or details to add, please send those to admin@texasrugbyunion.com. 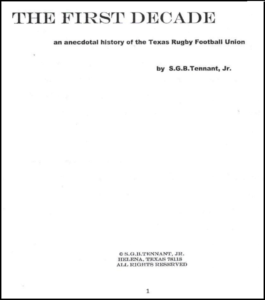 For a more in depth look at the first 10 years, we suggest you review the “The First Decade – An anecdotal history of the Texas Rugby Union” by S.G.B. Tennant, Jr..

Tennant takes the reader through the foundational years of the TRU, chronicling the first clubs and administrators who started rugby in Texas.

Rugby begins in Galveston, Waco and Austin, TX. Perhaps one of the mor famous stories begins at Baylor Medical after some Navy shipmen asked Grover Bagby & Ralph Rucker who were medical students if they wanted to play a game of “rugby”. From there, as they say, the rest is history.

A third team was started in Austin by Al Hagan, Nat Davis, and P. Ordino from South Africa.

In the beginning there was lots of driving across Texas for matches and so new clubs began forming. South Africa Roger Boos started one at Texas A&M, Ira Gruber at Rice University, and Dr. William Woodfin started a second club along with Andy Csvenko started Dallas RFC.

After this, the teams got together to begin scheduling a season and realized they would be better off if they created a union. And thus the Texas Rugby Football Union was born.

Teams tripled in 1970, including the formation of the Dallas Harlequins by Nelson Spencer. Nelson was also instrumental in  the effort of creating the United States Rugby Union.

Refereeing was becoming an issue during this time and the Texas Society of Rugby Referees was created by Dr. Ira Gruber, Roger Boos, Wayne Baxter, Tony Ivan-Smith, J.A. McDonald and Frank Van Lear.

TRU Vice President Carlos Puentes introduced the Champagnat Tour, where Buenos Aires teams toured and played many of the clubs in the Union. These matches opened the eyes of the clubs and they understood they had much to learn about rugby.

The TRU continued growing and was divided into 20 clubs:

This included the formation of the Union’s first women’s side, the Zulu Warriors RFC.

This year also boasted the first TRU men’s Select Side team who faced a visiting team from Nairobi, Kenya.

The TRU continued showing their organizational strength as a Union and soon developed contacts with the Heart of America RFU and Eastern Rockies RFU.

Through the HOA and ERRFU contacts, the Western RFU was created and initially included the Beehive RFU, the Eastern Rockies RFU, the Rio Grande RFU and the Heart of American RFU.

Once this new regional union was created, the WRFU joined the Eastern RFU (Louisiana to Maine), Mid-West RFU and the Pacific RFU to complete the formation of the USA Rugby RFU.

Gail Tennant and Nelson Spencer are considered founders of the USA RFU and were deeply involved in creating the first set of Bylaws.

More teams formed this year including the Houston Heathens.

Tennant was named the first USARFU Chairman and traveled with the Eagles to England in 1997.